Today, the first born in the Goggin gang turns 5.

It’s no exaggeration that Luke has been talking about turning 5…since about the day after he turned 4. Not sure what it is about the age of 5, but Luke thinks it holds a super power. He woke up today and was determined that he grew at least an inch over night, his brain grew bigger, and that he was practically a grown up who could just live life on his own now.

When he was born, I used to daydream a bit about when he would be 5…cuz clearly, that would mean all the hard part of parenting was like done right…HAAAAAHAHAHAHAHAHA. Silly naive new parent version of me. I pat you on the head and give you a cookie and send you on your way.

Five just seemed, SO ANCIENT. But now that we’re here, he’s older yes; he can hold conversations with grownups (which may involve jokes that make no sense and the occasional fart noise), feed himself, put his shoes and coat on, and almost mastered that seat belt action (curse you winter coats and stifling progress), but theres still so much littleness in his soul.

As the first born, I sometimes feel bad at all the times I tried to push him to just “be older” because that would of been easier on me. For him to act older than he was maybe ready for because Emma was the baby now and that meant he was THE OLD ONE who could do the things and do them well….wrong-o. 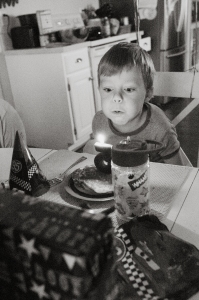 These follow-up kids have so much to thank him for on a day to day basis…for trudging the path first and taking the brunt of my trial-and-error parenting; sometimes we did good you and I and sometimes we failed miserably, but no matter what, that 5 year old is always ready to hug it out and move on (maybe after 45 minutes of high pitched screaming fits, but MOVE ON WE WILL).

So many things about Luke amaze me at the ripe old age of 5:

For the last few years, I’ve asked Luke roughly the same set of interview questions on his birthday. I went back and watched year 4…and many of his answers are still the same, but it’s still great to see the growth in his little spirit a whole 365 days later. I also love Emma trying to answer and refute some of his answers VERY strongly.

He’s just living his best Luke self that he possibly can, and that is swell.

Happy 5th Birthday to the head of the growing GKG (Goggin Kid Gang). We heart heart heart you!! Only 364 days until you’re 6!!