You know that feeling you get when you think you’ve won something really great? Simply because you have this feeling that others missed out…it gives you this feeling of being CHOSEN and like…the tits. But sometimes you realize you actually didn’t win at all…you kinda lost…and it kinda crushes your spirit into a tiny lil pieces that can only be fixed by a chocolate milkshake from Chik-Fila…not to be specific or anything.

I’ve attempted to win tickets to the White House Christmas Tree Lightning or Easter Egg Roll for years now. I’ve never won. Ever. And I thought this was a terrible thing, and was offended the computer Gods didn’t find me worthy enough to attend such an event of high caliber. I didn’t even win this year…but guess who did…MY MOM…so I kindly…sorta begged…to take her tickets instead…since they only give you so many…boo. She agreed. And I jumped for joy thinking of all the lovely pictures I would get of us skipping along the south lawn of the white house flinging eggs and singing songs in merriment as if we were a part of the Kennedy clan or something.

REALITY WAS SO MUCH DIFFERENT. 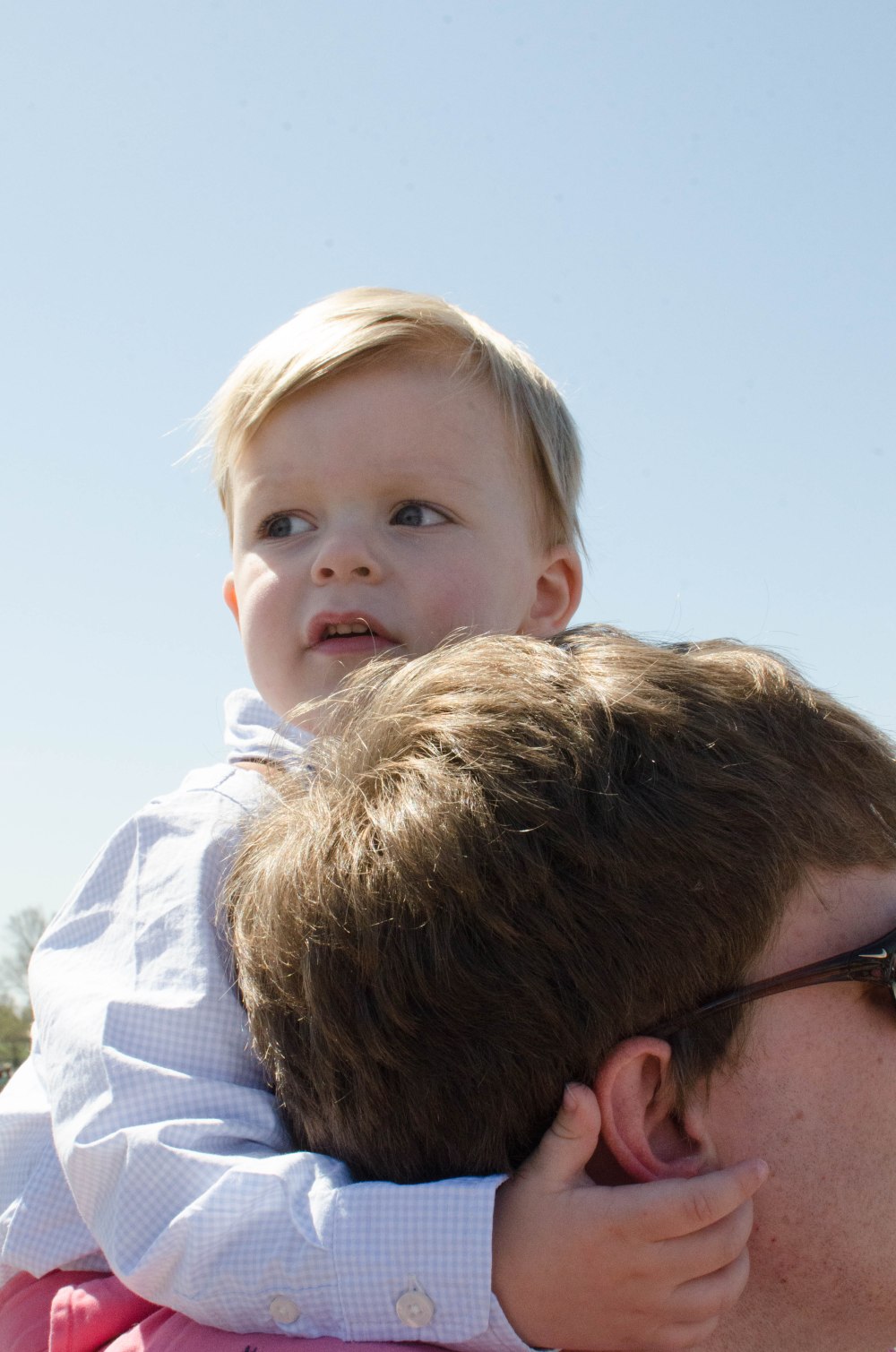 You know that feeling you get when you just KNOW things are about to go down hill fast? That feeling hit me like a mac truck when we first got in line…because it was a long one…and there were MANY of them…and I have a energetic toddler who doesn’t like to ya know…WAIT. I only had so many snacks because it said “no food or drink” on the ticket…I like to follow rules…and I wish I just didn’t.

After one mega bitch fit over having to sit in the stroller instead of running in the dirt like he wanted…we spent the next hour waiting to go through security, waiting to merge through a big balloon arch that gives you false hope of being anywhere close to the finish, waiting to wait to have our turn and actually GO IN…and just when you think you’ve successfully managed to not kill anyone as you wrangle a toddler for 60 minutes of utter boredom…you realize…the lines actually don’t end when you get inside.

I thought they did the lottery to help control the number of people they let into the event…welp, if any of the lottery peeps or listening, cut that number down by about 10,000 people…because y’all over did it. 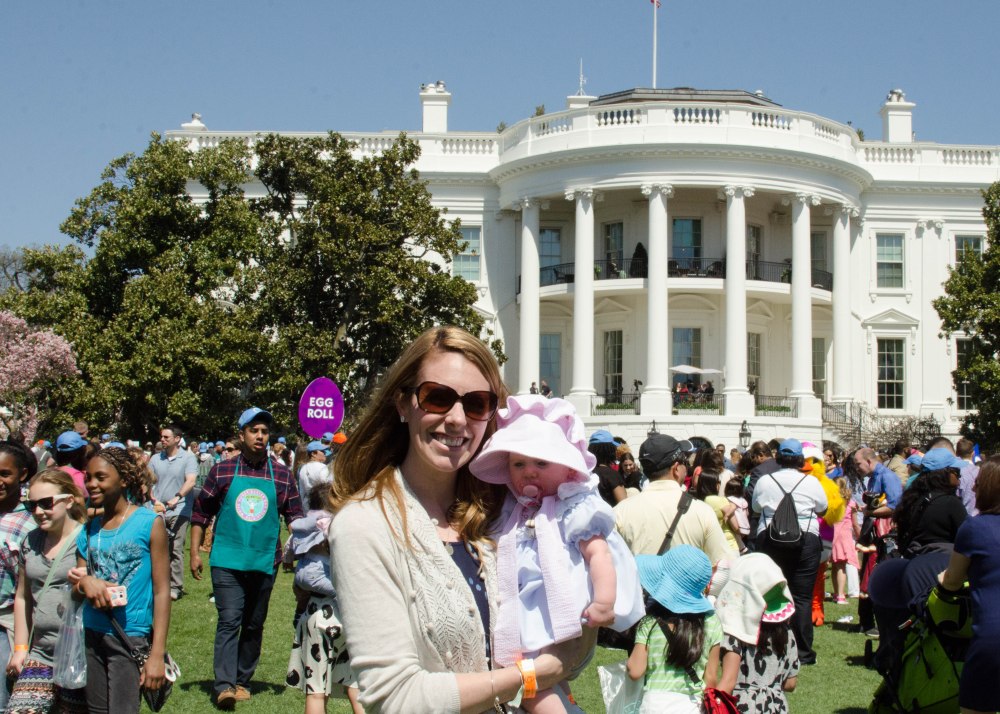 Luke’s favorite phrase during our entire waiting process was “I want to get down”…which he said no less than 45,000 times. I think he thought maybe we couldn’t hear him from being up on Pete’s shoulders…but we heard him…as did everyone around us. Sorry y’all :). I had flashbacks to that Simpsons episode where I think they’re at Duff Land or something and the entire point of one ride is to just wait in a line…it seemed to be endless…ENDLESS I TELL YA.

Needless to say…we didn’t do the actual Egg Roll because after the 60 minutes of waiting to get onto the lawn, we were spent…and the toddler just wanted to run and get lot amongst the crowd of people trying to take selfies over and over again. I’d read that Michelle Obama was doing a storybook reading at 1:45 and by golly I was gonna make it til at least then to see her…but when we made our way over…HOMEGIRL WAS ALREADY FINISHED…WHY HAVE A SCHEDULE IF YOU WONT STICK TO IT?!?! Curse it all. I saw her orange sweater fleeing in the distance…i’ll take it.

But…there are upsides. Like the fact that Luke got big bear hugs from Curious George, Daniel Tiger, the Octonauts, Super Why and Cookie Monster, and his heart nearly exploded. Or the fact that I saw some of the So You Think You Can Dance All Stars from a distance, y’all be sweet. Or that it’s pretty cool that we were ACTUALLY ON THE WHITE HOUSE LAWN AND I SHOULD JUST BE APPRECIATIVE OF THAT FACT…but….I’m a whiner…and I’ma whine if I want to, because TODDLER CRANKY IN PUBLIC IS NO JOKE. 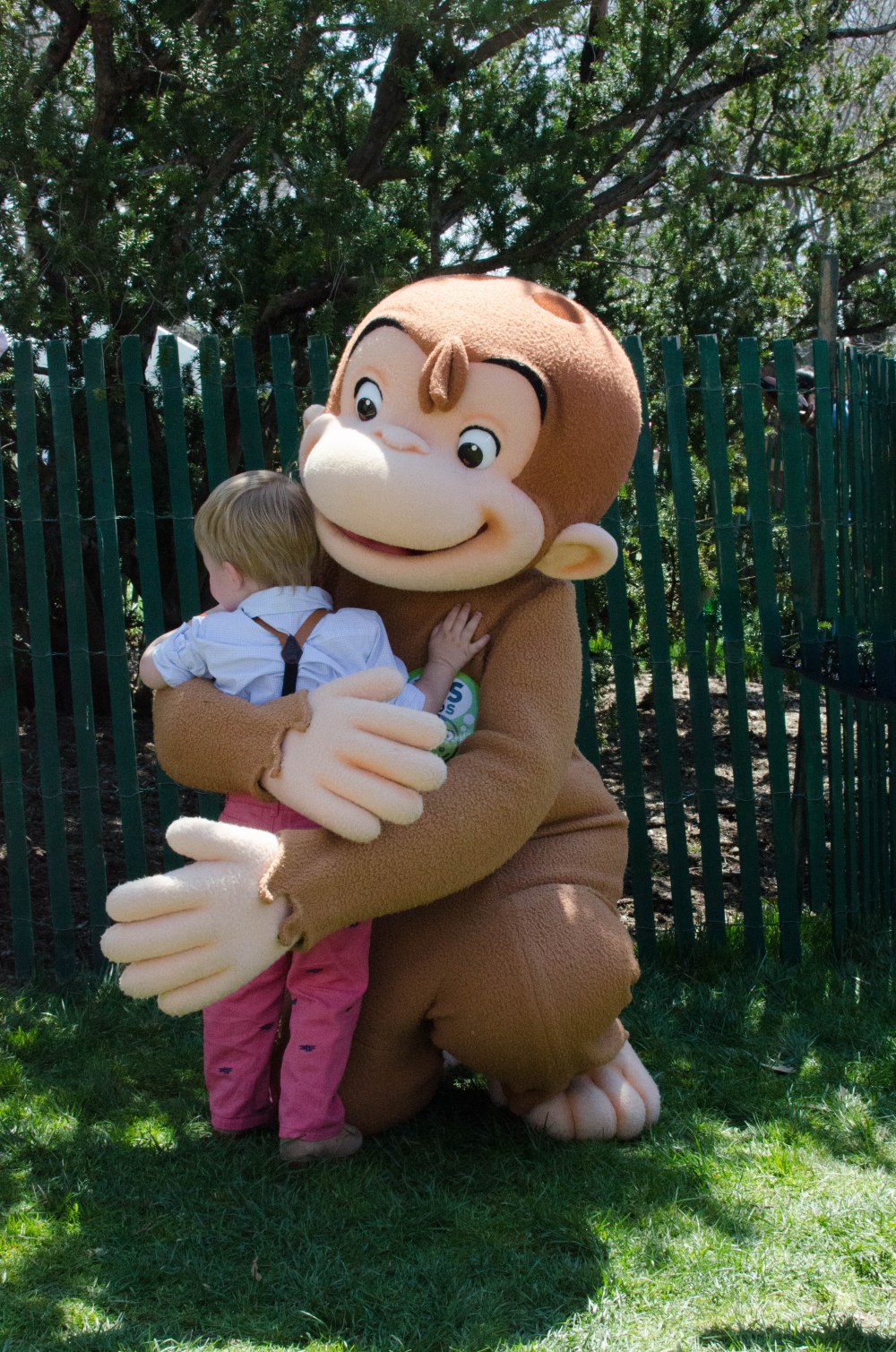 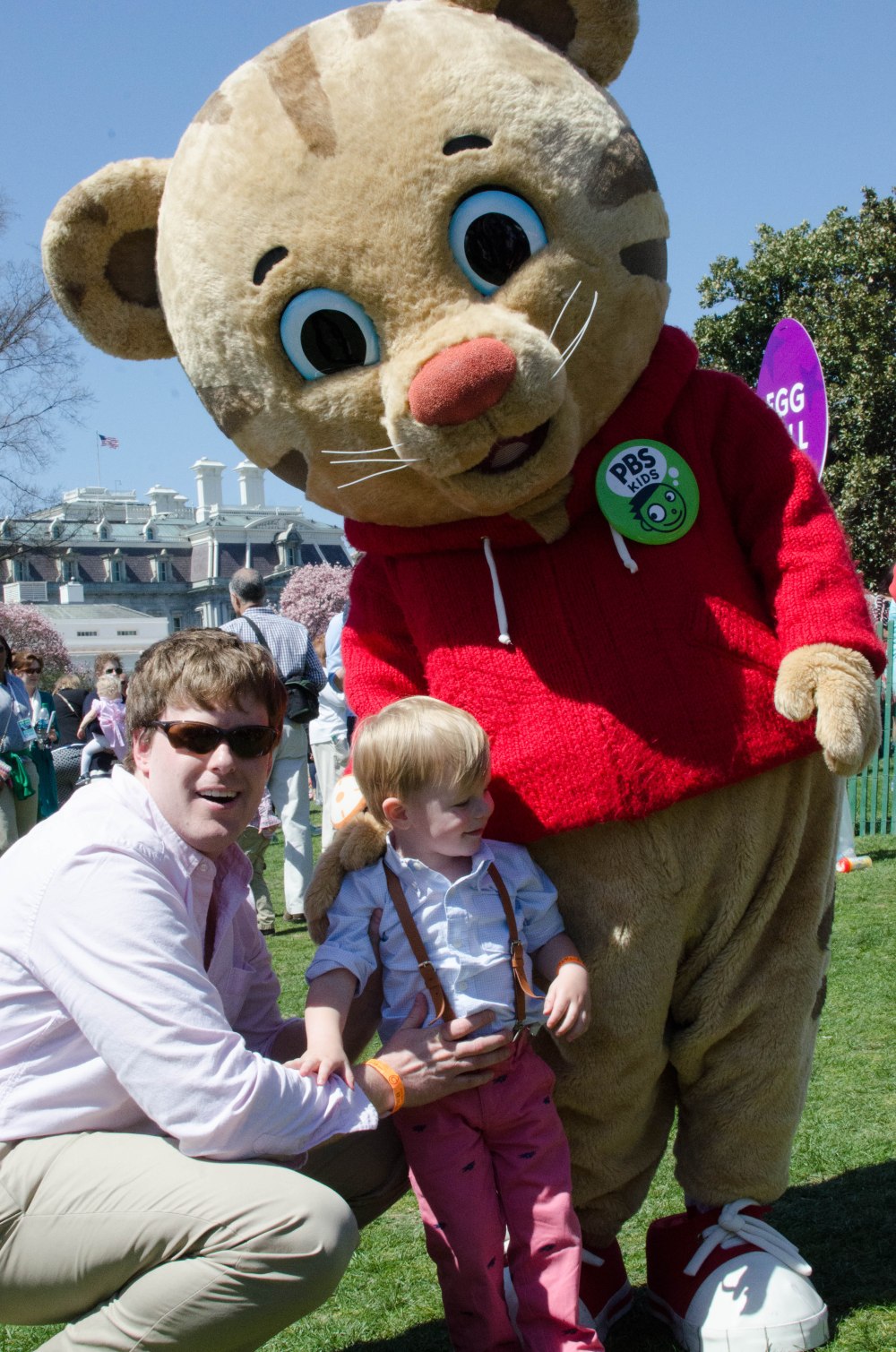 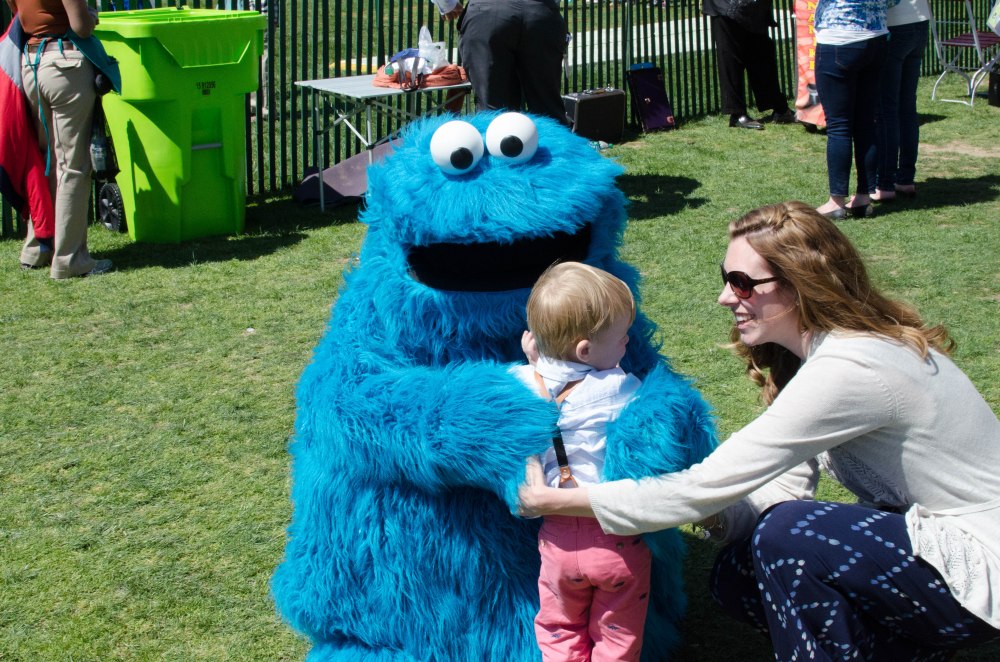 Luke’s favorite thing to do was play with the wood eggs in the makeshift egg farm and to do the hoola hoop. All things we can do…ya know…a thousand other places. 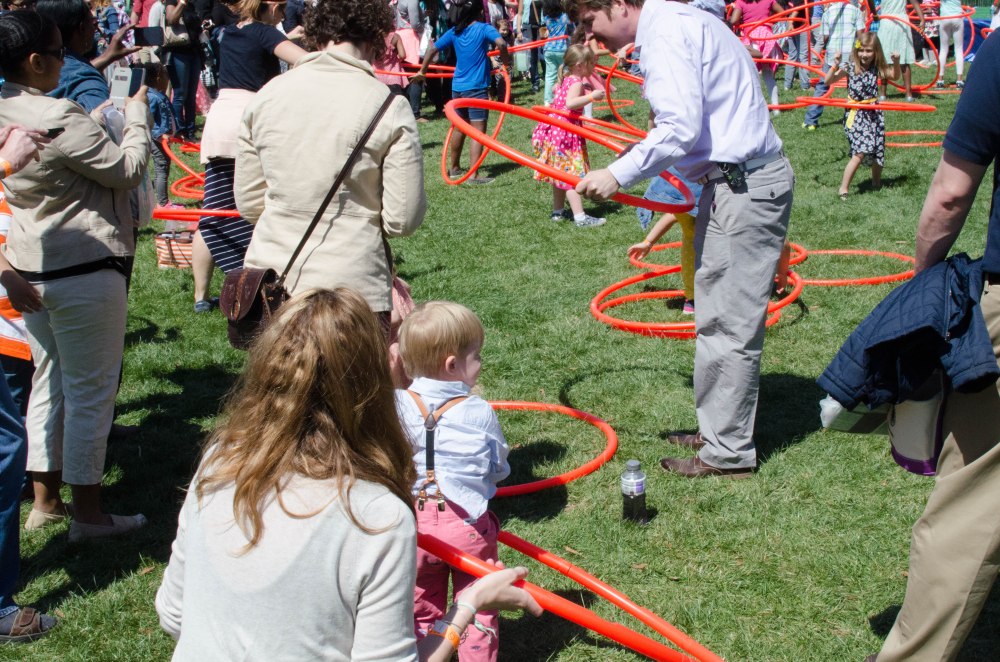 Word of the wise…if you have kids who like to run like the wind and just can not be contained…wait til they can do that. Maybe the morning and later afternoon waves weren’t as crowded as ours…but holy moses all mighty you can’t pay me to go through that again until my kids have the ability to listen, obey, and just BE COOL. And when it says show up at 11:30 to get in line..show up at 9:00 and just wait until they let you line up so you are first in line and can actually do everything before the herds of crazy people show up :). If ya can :).