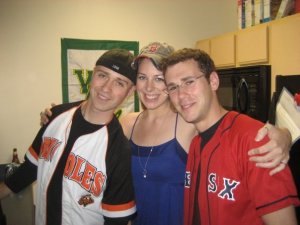 This weekend, we head off to celebrate the marriage of my friend Dennis (red jersey)  to his darling lil Bride Kate. It’s crazy to think that he’ll be married, but I’m sure he feels the same way about me and my friend Chris (orioles jersey) who got married last year. We had a hot an heavy relationship for 3 months freshman year of high school, it obviously didn’t work out (duh)… but im glad I got over my scorned lover phase and that we’ve been friends ever since. He was too short for me anyways 🙂

It’s crazy looking back on all the years we’ve been friends and still be able to walk through the super important moments in our lives together. Graduations, weddings, parties, houses, etc. The three of us used to do whatever we could to embarrass and annoy each other for laughs… now we’re grown ups with jobs and spouses and bills. Sometimes I think it’d be fun to go back to when our biggest worry was what night we were going to Famous Daves that week, or that my greatest joy came from beating Chris on an AP bio test..(he’s an emergency room doctor now…he won in the end).

Sometimes it’s hard having boys for friends…specially when you can’t go to their bachelor parties (AHEM), when they go off on sport talk tangents or something…but other times, it’s the greatest thing in the world. They’re both smarter then me. They’re both going to be way more successful then I ever will be. They both taught me a lot. Gave me advice when I didn’t want it, but I needed it. Picked on me until my self confidence was smaller then a pea. But, no matter how hard they try…they’re not getting rid of me :)…..I hope they don’t try too hard…I’m pretty stubborn, so it would take a lot.

Our lil three some is now going to be a six-some (made up word). 6 is better than 3. Whose going to turn this 6 into 7 first?? Who knows, but rest assure I’ll be the awkward non-related aunt telling  the best stories.