P and I went to our first professional Soccer game this weekend at FedEx….along with 81,000 other screaming, manic fans, wearing jerseys, scarfs, and carrying flags…it was something. P has become a massive English Premier League fan, so it made sense to nab some tickets and go see Manchester United sweep Barcelona under the rug (oh btw, yes we rooted for Manchester United….duh).

Now, normally, when there’s a big event in the city…Metro (worst system ever) accomodates this by adding more trains… did they do that this weekend? psht, please. They couldn’t be bothered. So…we waited…watched one packed car go by after the other…I may or may not have screamed ” I bleeping hate metro” at a car full of sweaty icky soccer fans who wouldn’t squish to the center of the car…(I see you standing sideways girl in the middle…turn!!) Like anyone else would do, I angry tweeted how much metro stinks at prepping for events in the city…I’m just going to believe that this was the reason they started sending empty cars to help accomodate the massive crowds, you’re welcome DC.

So, we finally got on a sticky, stinky metro car. Squished ourselves up against nasty, smelly, sweaty soccer fans, walked the mile or so to Fedex, and hiked the mountainous ramps all the way to the nose bleeds…. (weekend workout…complete).

To say the stadium was loud…would be an understatement. P and I went to a Monday night football game at Fedex a few years ago, and the noise level was NO WHERE near as intense as it was this weekend. Soccer fans…kudos for your vocal abilities.

I used to think soccer was boring, but it was WAY more entertaining then a baseball game. People are falling down pretending to be hurt at least once every 10 minutes, men are chucking themselves on the ground to tackle each other, missed opportunities, and goals from no where made this game enjoyable for a strict football kinda gal. It wouldn’t take much for P to get me to go to another game that’s for sure.Specially one with an English team because the Union Jacks and British Accents were all over the place, swoon.

Manchester beat the pants off of Barcelona. It was enjoyable to see all the cranky Barcelona fans walk with their tails between their legs 🙂 after screaming and chanting ALL the way to the stadium. Sorry guys. Maybe next year.

At the end of the game, one bold (drunk) fan decided today…was his day…to run across the field at the end of the game. He made it all the way across. Then he was met with about 8 security guards who LAID HIM OUT in front of a stadium of fans. It was the highlight of the day. Hope it was worth it to him.

All in all, Soccer’s not so bad. I had written it off as a stupid sport that I never want to watch or play again when I stopped playing in 4th grade to focus more on other things ( I obviously had many tough decisions to make at 9 years old…this being one of them). Next time…let’s go to a game in the UK P money :). I’m intrigued to see what they serve in their concession stands…anyone know?? 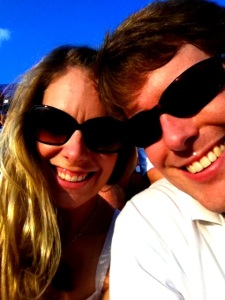 P.S. Kobe Bryant was there…he looks just as tall up in the nose bleeds as he probably does in person…Man be big.